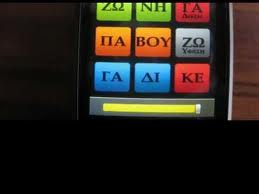 We would like to inform you about the creation and publication of the first Digital Isokratis, which can be used on the Android operational system.

The application has been developed by the new developer and student of Byzantine Music Christos J. Tagarakis.

The first version of the application has been published in June 2013. This is the first application of Isocratis, which is fully compatible to Android.

The Digital Isokratis is very easy and effective to use during the study of byzantine music. The application does not require any special knowledge and skills.

There has been paid special  attention to ensure that the produced sounds are as much as possible similar to the human voice.

Moreover, there is given the possibility to transfer the sound either from the headphone output of the cell phone, or directly from the speaker to the microphone (with reduced  soud fidelity).

You can test the Digital Isocratis in the free version (version: free) and if you are interested in, you can have a look at the digital version Isocrates pro.

You can access the Digital Isokratis-free at this link:

and the Digital Isokratis-Pro at this one:

https://sellfy.com/p/OhDS/ (in the description there are given the differences between the two editions)

It would be great pleasure if you inform us about your views and comments at: